So we went through with the yard sale Saturday. I know I called it a garage sale, but since we had it in the front yard and not the old, yucky garage, I thought it fitting to call it a Yard Sale :) 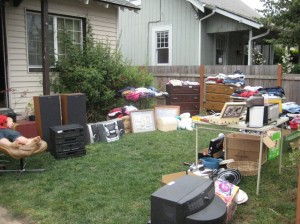 So, how did it go? Well, not as well as I’d hoped. We came out of it with about $35 and my nephews, who came over for the day and brought some of thier stuff, raked in about $25 from some of thier toys (Bakugan, Yugioh,Bionicles and some Air Soft guns)

So, here are a few things I learned. Some are things I did do, and some that I’d do differently next time….

Oh, yes, and you should check out some of the pics that Allison O at O My Family has from her yard sale this weekend! Great idea for how to hang clothes if you don’t think you have anything to hang them on!

Well, I’m going for it now….There’s no turning back…. I’ve placed the ad on Craigslist for it, so I have to go through with it(unless it rains, of course).

We’re having our very first, ever, ever, garage sale! After almost 10 years of marriage and 3 kids later, we’ve never had a garage sale before! Usually we just take stuff to Goodwill or throw it away, but not this time! Now I just need to get it together and go through some more things. I have maternity clothes pretty much all in one spot now, and the dressers we’re getting rid of are mostly cleaned out. I still need to wipe the dust off of a couple stereos and go through my kitchen stuff that is in a box in a cupboard that I haven’t looked in in ages, mostly because there’s something blocking the door from being opened, although I could just move that something, but apparently I didn’t need that stuff down there that bad anyways :)

Oh, yes, and the kids are going through thier toys saying “I want to sell this one mommy” and I’m usually saying” no, lets not sell that one, you just got that one for Christmas this year, lets find something else!” LOL

There are probably other things we could sell too, but I have such a hard time letting go of things until it’s like, 5 or 10 years down the road! Like my pants that I’ve had since Chris and I got married! They don’t fit! And after 3 kids and expanded hips that will never go back to thier original place again,,,, The pants are NOT going to fit….EVER! So I’ve finally come to terms with that. Besides the fact that it’s been so long that I don’t even like that style of pants anymore anyway. :)

So I guess I’ll post an update on Monday about how it all went. Tomorrow I imagine I’ll be too busy to post anything! Although, my mom is coming over tomorrow and spend the night to help out. I LOVE my mom!

Ah, yes, and I forgot to mention that I’ll be displaying some of my homemade soy candles too which will be for sale! I’m excited about this. Hopefully they will sell, or at least people will pick up my card! We live on a main road that is fairly busy, so we should get plenty of stoppers by!