Not too good! First of all, I got to bed super late last night because of some exciting developments which I will try to share with you soon! I will say that I was doing some research on how to use Quickbooks

and trying to find tutorials on Youtube. And then as soon as I got into bed, Ekid woke up….he had wet the bed…. Grrrr! So I had to clean him up and get him back to bed. Then awhile after I finally got to sleep, Cman wakes up, so I bring him in bed with us. So instead of getting up at 8am in order to get the boys up and start our school day, I ended up sleeping till a little after 9, and still, I was sooooo tired!

So then, the boys were watching OPB programs and I just “couldn’t” turn it off when they had finally eaten breakfast and I was ready to start the day which was about 10am. So I figured I’d let them finish watching since the hubby was going to be home around 11am for lunch.

After I fixed my man lunch, and the beloved program was over….. I quizzed Nboy on a little math and went over his times tables a bit and then I sat Nboy down to work on his 3rd grade reading out of the McGuffey’s Third Eclectic Reader

. Talk about whining! He reads really well, but I could not get him to read nicely this morning! It was that scratchy, whiny voice and with me getting mad and him not wanting to read, he started to cry…so I forcefully closed the book, and told him to go lay down and take a nap(which he said he wanted to do anyway).

So while he is in his bed, I started Ekid (Kindergarten) on his Teach Your Child to Read in 100 Easy Lessons

.  He did really, really well. We started in on the 9th chapter where we left off a few months ago and he picked it right up as if we hadn’t stopped. We didn’t work on the handwriting because their wall desk is still completely cluttered.

So about the time we finished that, Nboy comes out of his room and says he’s feeling better now and wants to learn about the vikings. I had told him yesterday that we were going to learn about some vikings that discovered America since we are starting on American History this year.

So I have my Accelerated Achievement  cd that has grades k-12 on one cd, and we started reading about the vikings and Eric the Red and up to where they were trying to find Greenland sailing from Iceland and were caught in a storm and got off course and ended up along the coast of North America. They saw the land that it was green and full of trees and knew it wasn’t Greenland, so after 2 days, they turned back and sailed to Greenland and never came ashore here!

Anyway, I incorporated some maps to show the route of the voyage, and we looked up some pictures of what vikings wore and what their ships looked like.

That part of our schooling worked out well and kept at least Nboy interested.

But that was about it. Though Nboy did get on the computer and started typing a story. I really need to find a typing program to teach him how to type correctly too.

. I think Ekid knows enough to start first grade math instead of Kindergarten, and Nboy is on 3rd grade. I still haven’t ordered their workbooks, so we will just have to skip the workbook work for now.

Then we’ll do reading, some more history, writing and P.E.  I think that’ll be it for tomorrow. I need to get together what I’m going to do for Science and Geography and then we’ll start on those next week. I’m thinking about only doing Science twice a week, and probably Geography also.

And once I get some piano lessons ordered, I will start teaching them piano and we’ll also do some singing, and art. Chris will probably start giving Nboy and maybe even Ekid a guitar lesson once a week also.

Ahhh, there’s just so many things to do!  I’ve really got to get this organization thing down!

So, do you homeschool? If so, how did your first day back to school go?

So, next in the series (see my last post). I think this video turned out much better. In this one I show you how to install and do some customizing a wordpress theme, namely the Atahualpa theme. I really love the Atahualpa theme because it is so customizable. Much more so than any of the other themes I’ve tried. It’s not for everyone though. If you just want to get your website or blog up fast with a cool look right out of the box, Atahualpa isn’t the theme for you. It is pretty plain right off the bat, but If you like to change things up a lot and put your own spin on it, then this theme is pretty fun to play with.

So let me know what you think of my videos. What can I improve on? Are they easy to follow?

Hey, so this is my first Youtube video…Yay! I thought I’d do a how to on how to build your first blog with wordpress. It took quite a few takes, but there it is. I still feel like I wish I would have redone a few things, but I’m not going to look back now. My next video is better since I learned a few things from the first.

I’ll be posting the next video in this series soon!

Let me know what you think :) 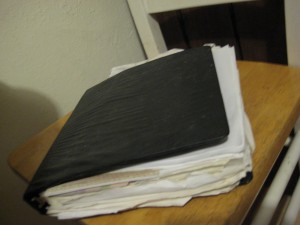 So I am awake at 1:23am and tomorrow is payday(or should I say…today), which means, since it is the end of the month, I need to go grocery shopping for next months meals. Now it’s been awhile since I did some serious meal planning, but I do have quite a few budget recipes in my arsenal that are tried and true for us, so I’m just going to break out my binder (my unorganized binder as you can see above) and sift through the recipes and find enough to give us some variety each week.

First of all, here are some ingredients that I already have on hand, so I will try to find meal recipes that will incorporate these ingredients:

So that’s about it aside from some condiments and spices, but our refrigerator is looking pretty bare right now, especially since my mom cleaned it out for me while she was here helping with the yard sale.

So here we go starting with week 1 of my dinner menu plan for the month. I’m just going to go through and find easy, budget friendly meals and jot them down. I don’t have to go in this order when I actually get started with the week. I just need to know what ingredients I need to buy for the month:

So that’s the plan for now. I’m going to make out a grocery list for this and maybe make some changes if it’s going to end up going over budget.

I’ll post the breakfast and lunch menu plans sometime tomorrow. I may just do a shopping trip tomorrow and then again on Saturday or wait to see what next weeks deals are at Fred Meyer.

So what are your favorite budget friendly meals??

*UPDATE* The video is now uploaded. Learn How to Start a Blog or Website in 10min. or less!

I’ve started a new blog called My Work At Home Ventures. I’m excited to chronicle all the different online businesses that I’ve been working on and track my progress. My short term goal is to make $200 a month with these combined online businesses, and I wanted to start a blog dedicated to that. For one thing, it will hopefully help keep me on track and focused, and also, I’ve decided that I love doing video tutorials!

So I’ve almost got my first video ready. I thought I had it ready last night, but it didn’t turn out how I thought it would when I uploaded it to YouTube, so I had to take it off and do some tweaking. Hopefully by the end of the day it’ll be ready to post!

My new blog is very plain right now and the first video shows how I set it up through Bluehost using WordPress.  My next videos are going to show how to choose a theme and customize it, how to set up important plugins, search engine optimization and so on.

So hop on over to My Work At Home Ventures and check out my first post that tells a little bit about how I started building online businesses and what my plans and goals are. :)

So here’s the blooper for the night. I have cooked squash in the microwave plenty of times, but never had this happen….. 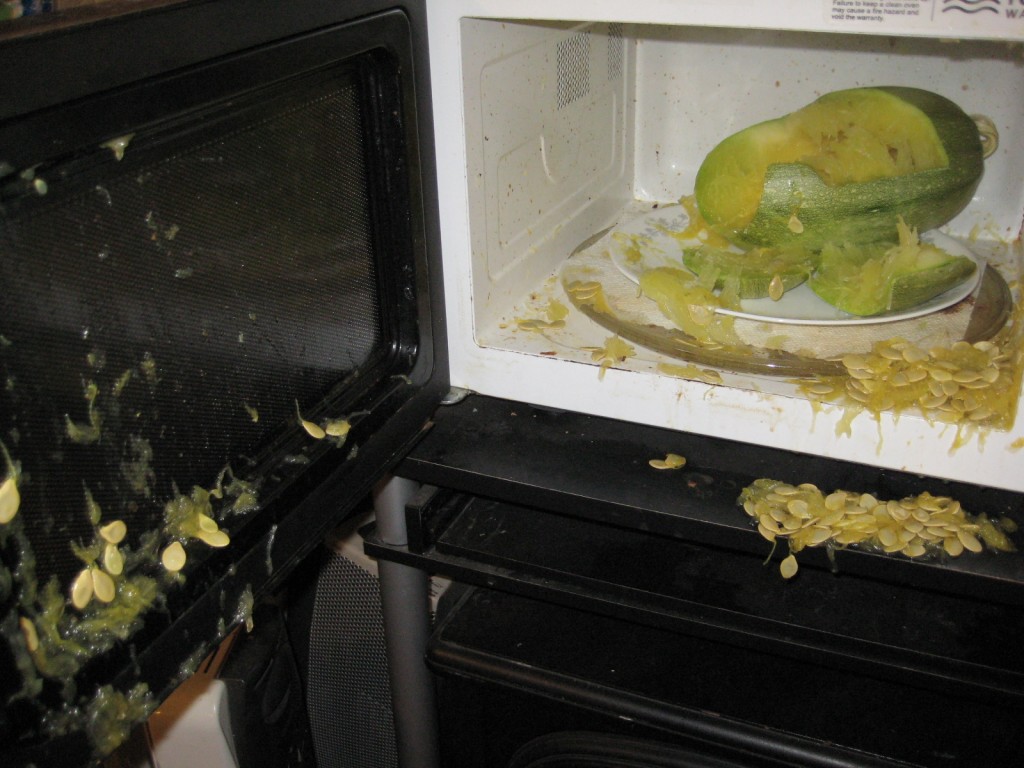 Ooops! At least all the seeds are out now…..