or, Duffusing a bad attitude….

*News Flash*
Our kids have bad attitudes at times. (sometimes they even throw fits! GASP!)

I’m sorry to say, they are not perfect. They may look it, but…..no. 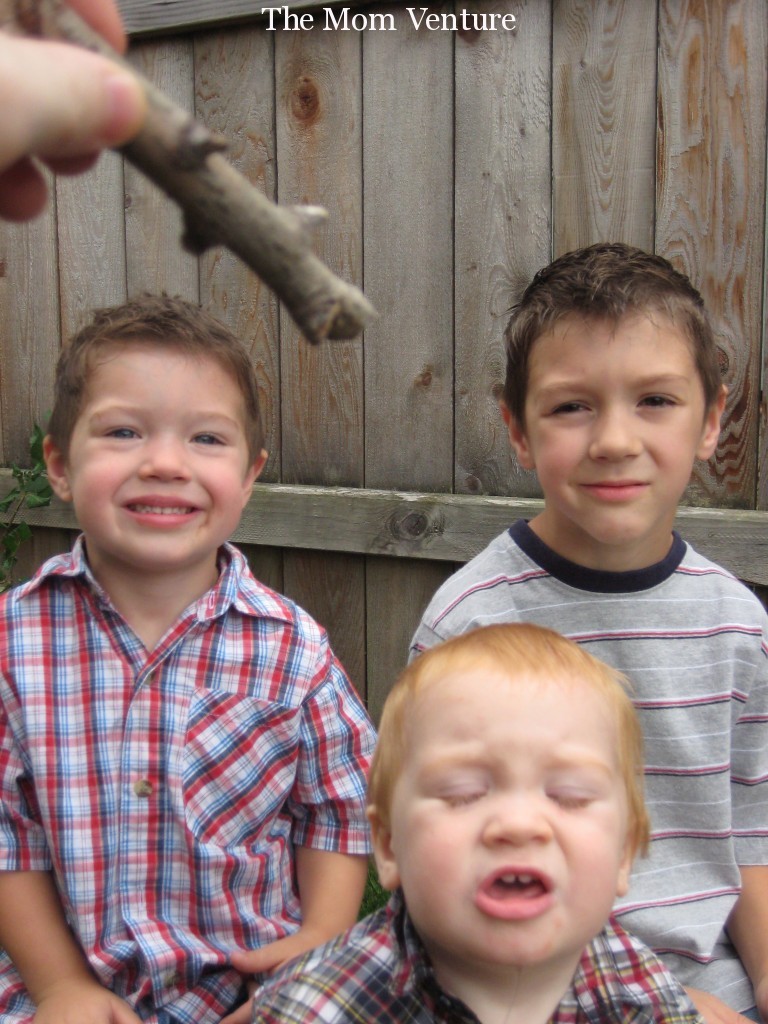 (Yes, that is a stick I’m holding up to try and bribe a smile……)

So I’ll share a little bit about how I deal with a bad attitude and keep it from turning into a temper tantrum. Much of the time I’ve been successful at it. Of course, tantrums are inevitable at times and sometimes nothing you do to head it off works, except a good old fashioned swat on the bum and sending them to their bed till they settle down (works for us!).

But many times I try to diffuse the situation with this tactic first as it is great for all involved at cooling off a hot temper or bad attitude.

Now it depends on the situation, but I’ll give you an example.

Yesterday Ekid, who is 3.75 years old, did not like the shirt I chose for him to wear. So he is in the makings of throwing a little temper tantrum. Pouting, saying ” I want the red shirt” and just generally being unhappy and not wanting to go outside in the chosen shirt. Now I do not give in when they are having a bad attitude about it and let them have their way. Maybe if they ask nicely, but not when it’s complaining and pouting and making mad faces…..no. So I stood my ground on the shirt.

So I tell him “You need to have a good attitude” in a stern voice. Well, he looks at me, and a smile creeps across his pouty face. I say “What? A-tti-tude?” and he smiles some more and says “what’s that mean?” So I tell him that a bad attitude is when you’re being mad, or sad, or mean, and a good attitude is when you’re being happy and nice. That’s paraphrasing it anyway. You don’t think I’d remember exactly what I said do you?

So I say “you need to have a good attitude, not a bad attitude” purposefully saying “attitude” because he really thinks it’s a funny word.

So after that, his attitude completely changed. I hugged him and tickled him and we went ahead and changed his shirt.

Later on he got mad because NBoy was playing outside with the neighbor boy and was going to go over to his house and I told Ekid that he couldn’t go.

So what did I tell him? I said “You need to have a good attitude” and that word just cracked his pouty, mad face into a smile and he gave me a hug and wasn’t mad anymore :)

So a little humor can go a long way in heading off a temper tantrum or bad attitude. Like I said, it doesn’t always work and it may not be for every situation, but it did work in this situation, and I even used it today and I still got a smile out of it. We’ll see how long it lasts :)

2 thoughts on “Heading off an almost 4-year olds temper tantrums….”