Yesterday Ekid was forced to eat a spider. A dead Daddy Long Legs. By Nboy no less, who did it because the neighbor boy (who is 2 years older than him) told him to and Nboy thought he wouldn’t be his friend anymore if he didn’t do it.

Now this boy seems to be a pretty good kid and we really haven’t had any incidents until now. They just moved in about a week or so ago and he’s been coming over to play in our yard almost every day. This is the first time Nboy has had someone to play with right next door.

So Nboy comes in the house looking like he’s about ready to cry and saying that the other boy made Ekid eat a spider. I go out back to find poor Ekid bawling and the neighbor boy says that Nboy made Ekid eat the spider. So I politely tell him to go on home while I have a talk with my boys.

I then find out that the neighbor boy told Nboy to do it. Nboy felt awfull, but he still got in trouble and I had a good talk with him about not doing what someone says just because you want to be their friend. If a “friend” wants you to do something that is wrong, don’t do it. If they want you to do bad things, then they aren’t a friend. And I told him he needs to stick up for his brother, or anyone that’s being picked on and help them. I told him that he needs to be the one that does what’s right. Both of us were on the verge of tears.

Thank the Lord(I’d been praying I wouldn’t have to deal with this), the neighbor boy showed up at our door a little bit later wanting to apologize to the boys and said he was just playing around, but they took him seriously. So I thanked him and just told him not to play like that anymore or he wouldn’t be able to come over and play anymore.  So I think all is well again and that was a huge relief for me! I didn’t think he was really being mean. I know Nboy can be kind of gullible sometimes and can be too agreeable when it comes to playing with other kids. I never had a problem with him sharing when he was real little. In fact he was one that would just sit back and take it if another kid would take something from him.

Now Ekid. The poor thing was a bit traumatized. I mean, 3.75 years old and he’s forced to eat a daddy long legs spider. EEEWWWW! So when I was talking to him about it, he kept touching his throat, and kept telling me, no, he didn’t eat a spider. No he didn’t swallow a spider. No a spider was not in his mouth. He was very firm in the fact that he did not eat a spider, although he would always hang his head whenever I asked him. And he kept touching his throat…..

So later that night at bed time, I had tucked them into bed and was in our bedroom getting Baby ready for bed and Ekid comes into our room and says”Mommy, get the spider out” I say “What?” he says “Get the spider out” All the while he’s holding his throat. I finally realize what he’s saying and realize that the poor boy thinks that spider is still in his throat!!  So I had to explain to him that the spider is not in his throat, but it went down into his tummy and it’ll come out in his poop. So naturally he wants to go sit on the toilet so he can go poop. This is 10:00pm. He finally goes poop a teensy tiny bit and I tell him that the spider might have come out. And he seems to agree. This is after having a talk with him while he’s on the toilet about how your tummy breaks up food into teeny tiny pieces and then whatever your body doesn’t need turns into poop and comes out.(you really wanted to hear about that didn’t you? hehe)

So I put him back in bed, but he is still sure there is a spider in his throat! Ahhhhhh! He says he can feel it. So I talk to him again about it going to his tummy and his poop. And then we tell him to stay in bed now or he’s getting in trouble. Then he finally went to sleep. 11:00pm.

So through all that, I guess it was a good lesson for Nboy to learn…… (-:

Speaking of spiders. Here’s one that I killed last night. We get these running through the house quite a lot this time of year, only this year they have mostly been even bigger ones. We still aren’t sure if they are Hobo spiders, or another kind of spider that I’ve read looks a lot like the Hobo spider. Be nice to know for sure, because Hobo’s are poisonous and the other kind is not…… 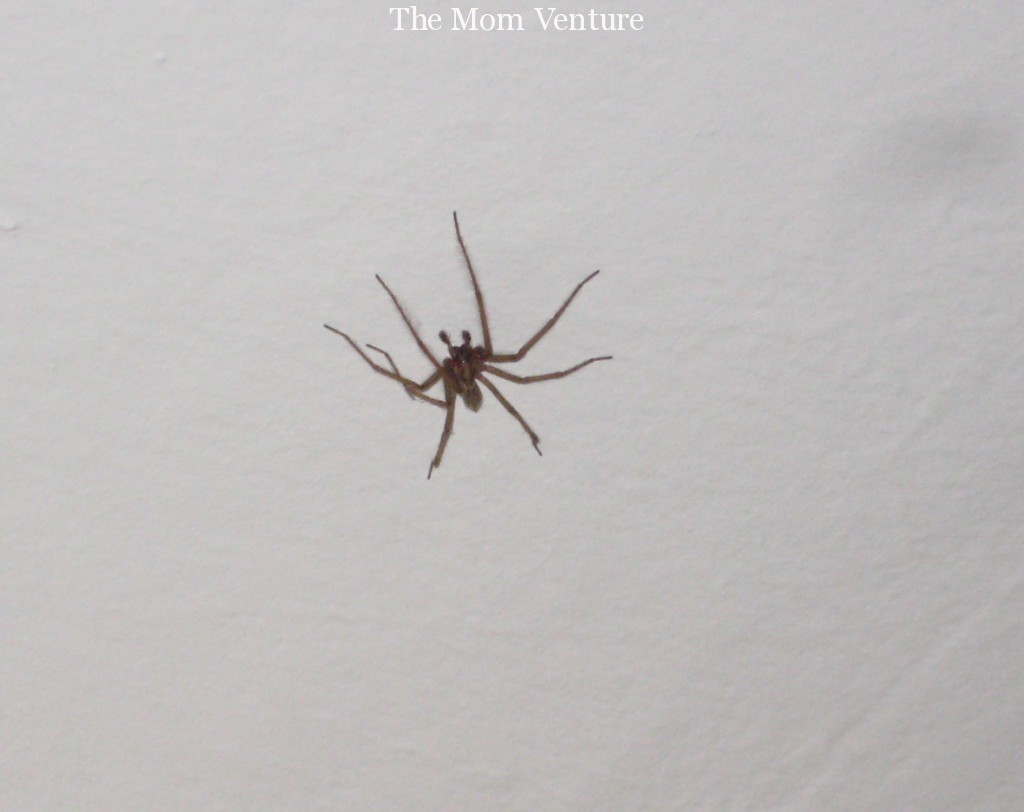 Sorry if I grossed you out. :)