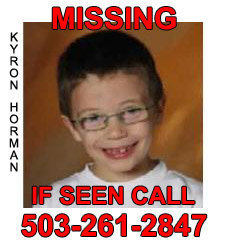 I don’t usually get so involved in a case like this, though any missing child case hurts to hear about, but I haven’t been able to stop thinking about this poor boy. Maybe it’s because It’s in the same state and little Kyron Horman is only a year older than my oldest son. It’s also very disturbing that it has been 4 days and they can’t find any trace of him, or if they have any leads, they aren’t saying.

Kyron Horman disappeared Friday, morning, June 4th. His stepmother brought him to school a little after 8am for thier school science fair and left him there about 8:45. Supposedly someone saw him at the south entrance at around 9am, but then he wasn’t there when roll was called and noone saw him since.

They’ve launched a huge search, but still, no leads that we know of.

You can read the news stories on the Facebook page they have set up for him here: Kyron Horman Facebook

This is so, so sad. I cried for this family when I read about it Friday night. I just cannot imagine dropping my child off at school, thinking he’s safe, and then find out he didn’t make it to class. The sad thing is that the parents were not notified that he was absent. Not until the step mom went to meet him at the bus after school did she find out he wasn’t on the bus and then called the school and found out he hadn’t been in class!

It would be great for everyone to pass this along! Especially if you live here in Oregon. They aren’t saying it is an abduction yet, but, to me, it sure is looking that way.

This little boy and his family are in my prayers, and I hope, sincerely for his safe return.